Welcome to my Gordon Ramsay Adventure! 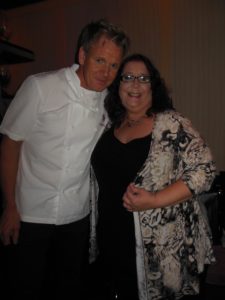 You’re probably asking yourself right now, why Gordon Ramsay? I know I would be too. You see I have been following Gordon Ramsay from the day I laid eyes on him. I quickly became enthralled with Hells Kitchen, and Kitchen nightmares, along with his many other shows on the BBC.  I don’t follow Gordon Ramsay because he’s an international television star, I follow him avidly because of who he is and the master of his craft. Most people see him as a mean spirited jerk who likes to swear a lot. I see him as someone who won’t lie to others to make them feel better.  I’ve read his books, studied his technique and over all admire the man greatly. He didn’t come from the best upbringing, but if you ask me, here is a man who truly lives when life gives you lemons make lemonade.

In watching Hell’s Kitchen over the years, I don’t see a mean acerbic man, I see a man who is looking for leaders. Very much like army boot camp, you weed out the weak.  I see through a lot of the bells and whistles of Hollywood ratings, and have seen a lot of compassion from him when he finds someone he truly believes in. Season two had a young chef named Julia, she was a Waffle House cook, and believe me, the rest of the snoots were happy to remind her that, that is all she was, a short order Waffle House cook.  Did Julia go all the way, to win the prize and to be a head chef for Gordon Ramsay? No, of course she didn’t. She got far greater than that, she had Gordon look her in the eyes and told her to believe in herself and to show her that he believed in her, he sent her to one of the finest culinary schools and told her you come back and win this, do you hear me?  That is not a cold hearted man.

I guess what I’m saying is, I’ve had this passion for cooking my entire life, and for so long have wanted to live my dream, but never quite believed in myself, and Gordon Ramsay has given that to me. He doesn’t know me, and he probably never will, but it goes to show you that without even knowing it you can change lives of others.

Live your dreams while you can, no one ever went to the grave wishing they had spent more time at the office.  Live, laugh and love.

Have a suggestion?  Want me to try a new recipe and write a blog post about it?  Drop me a note and tell me your thoughts!