I had to chuckle to myself as that came across my chat box tonight by an unknown face…  it went something like this..

John:  Hi Donna
Me: Hi John
John: What are you doing and how were your holidays?
Me: My holidays were good yeah, and right now I’m working on my blog about cooking along with Gordon Ramsay…
John:  Do you mean Gordon “F” Ramsay???
Me: Yep, isn’t it great?

You see I usually get that kind of reaction from people when I mention my complete adoration for GR. Oh I know, he’s rude crude and socially unacceptable. I even had a close friend from Edinburgh who used to just become irate with me at the mere mention of the man. He would pace back and forth and swear a bit him self about what a bully GR is, and I would always just smile and say “we’ll have to agree to disagree”. Then my friend would yell “turn coat Scots going SASSENACH”. Of course this means about as much to me as a pig sprouting wings and flying.

Let me explain to you my dear readers just why I adore the foul mouthed bully chef.  When I see the man I see more than what the rest of the world sees. I see a man with passion and talent.  Not just a talent for cooking but a talent for entertainment.  We humans by and large thrive on drama, I have known a few people who aren’t happy unless they are making others miserable or being mean to others. Personally I don’t understand the need to hurt others just simply because you can, but what do I know?

Hmmm… I should probably step back a few years to when I first really developed a love of cooking.  My mother was a HORRIBLE cook, and for self preservation I learned to make a few basic things like grilled cheese sandwiches etc. My mother would always come and take my plate and say “thanks, now go fix yourself one” (my mother and I do not talk to this day). Where I really learned to cook was by observing. My dad a  long haul truck driver could turn a pile of leftovers into a masterpiece, looking back on it now, it probably wasn’t all that great but anything was better than my mothers pork chops in a crock pot simmering in Campbell’s cream of mushroom soup.  This was my mothers cullinary extravaganza In her defense she really didn’t have much choice as we all grew up pretty poor.  Our big meal of the year was Thanksgiving and it was always wonderful, my dad really knew how to throw together a turkey.  It was one fateful Thanksgiving day that my life as a cook would blossom.  Dad passed out drunk at 11 am, and mom was at work. Company due to arrive and nothing in the kitchen except a turkey in the oven and every counter full of packages of spices and boxes of bread crumbs etc etc… I didn’t know what to do, I couldn’t wake my dad up, so there I sat all 16 years old of me crying in the middle of the kitchen.  I just knew that if I didn’t do something or if I messed up my dads meal it would not go well for me. My dad and I have since reconciled but for the most part he was a very abusive father. Any time I had ever shown a desire to learn to cook I was always shoo’d out of the kitchen because quite frankly I can admit it now, I was a pest. As soon as I started to pull myself together I started looking at the foods around me and put them in some semblance of order.  Before I knew it, I was picturing all the foods that I had eaten all of these years and for the most part pulled off my first Thanksgiving meal of my life. Okay so the stuffing could have used an egg to hold it together… but who puts eggs in bread, right?  My aunt showed up a few hours into it and helped me pull the rest of it together and to put it mildly kicked my dads ass into submission.

So there dear readers is where it began.. all the recipes that my dad would never share with me, like is biscuts and gravy or the family favorite his macaroni salad.  I no longer was dependant upon him or anyone to give me recipes I developed a talent for tasting, touching and smelling. There wasn’t a single recipe put in front of me that I could not duplicate. Sometimes I would ask a chef now and again how something was made, and that my dear friends is what gave me my cream of broccoli soup.

Fast forward to 1994 the year my first husband was transferred to Ramstein Germany and I had my first party in our little house in Weilerbach.  I put out a spread fit for kings.  There was a captain there who said “you know Donna you can make money doing this”  So, guess what? I DID!  Being married to a low ranking enlisted airman, I had to make extra money somehow, we had three small children and Germany is very expensive.  I started a small catering business that did very well during the holidays.  I catered everything from cocktail parties to entire, yes you guessed it Thanksgiving dinners!  My most successful though were my romantic dinners for two cooked right in their own kitchen.  I cooked, collected a deposit for my dishes and left the couples for a lovers tryst.  I did that for about 2 years and then I flat burned out. Not being a business person, I always short sold myself and had a business that was too successful for one person and not lucrative enough for me to hire more people. My staff consisted of my three kids ages 4 to 10, and a very un-supportive husband. He did carry things in and out for me though.  So ended my days as an amateur chef.  But never my dream of someday delighting guests with amazing dishes prepared by my hands holding a glass of fine wine and laughing light heartedly at joyful banter.  One day soon readers I will tell you all about “The Celtic Bella”

Now back to GR.  I’ve been a fan since season two.  Yes yes yes I know the man is a foul mouthed prick, but… is he?  Army drill sergeants are too, but do you really want a solder protecting your country who has been coddled through basic training?

The restaurant business is the single most failed failed business in the USA if not world wide, so believe me you have got to be tough!  I don’t just watch Hells Kitchen, I like when I was a kid, I observe I observe an offensive foul mouthed man weed out the weak. If you really study him you will see that toward the end of Hells Kitchen, what you find is a man grooming an executive chef. The man is brilliant!  Who else can pull off  having a top rated TV show fully funded by Fox network, and what does he get out of it? Probably a damn fine salary, and in some cases a head chef that he’s gotten to test way before he ever puts them in one of his kitchens!  Not to mention his own restaurants that I’d have to mortgage my house just to visit.

So ask me again why I adore Gordon Ramsay?  If I haven’t made it obvious the man has taken a crap draw of a straw in life (read his biography), and grew it in to the long one… the winning one.  Is GR the best chef in the world? Probably not… who really knows. Is he the most famous, you bet!  You can go on thinking that he’s just a foul mouthed jerk, I say he’s amazing.

So okay, my darling husband ran out the day after Christmas and got me Gordon Ramsay’s newest book  “Cooking for Friends”  I was so excited as I

was thumbing through the book looking for things to cook that would both shock and delight my guests.  There it was… “Conger Eel Bisque”. I felt my stomach lurch as I envisioned the moray eels I had seen in the tanks in Sea World just the month before.  I Google searched a bit about the eel and was horrified as I saw this gargantuan slithering sea snake that had to be at least 15 feet long.  Now you really have to ask yourself… who saw one of these and thought it would be a good idea to eat it? I’m thinking that the conger eel and I will have to have a serious heart to heart more toward the end of my experiment.  But I will not let this conquer me.  There may be things in this cookbook that I didn’t realize were humanly possible to eat, but on the bright side, I may find new things that I enjoy eating.

I anticipate as I’m looking through my new book, that there will be things that will be a challenge to find, and I will have to make some substitutes.  I don’t know where I would be able to find creme fraiche here in Arizona, and from what I can gather it is something between sour cream and heavy cream.  I shall find out.  The plan today?  Call the gourmet store and find out how they can help me find these ingredients, If not there, perhaps how to find the culinary gems that have made Gordon Ramsay so famous.

I got the inspiration from the movie “Julie and Julia”. I understand that Julia Child was not thrilled with Julie’s tribute blog to her, from what I gathered is that while a very good cook, Julie wanted to be a writer. 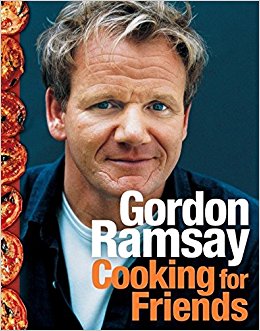 As I watched the movie I realized, there are a couple of things I’m exceptionally good at, one is cooking the other is writing.  I am not a writer so please bare with me.

Having said that, I do want to offer a disclaimer in that Gordon Ramsay does not endorse this in anyway shape or form.  All I can hope for is that he doesn’t stumble upon me and say what the f*ck does she think she’s doing????

So here’s the New Years goal…. Cook through GR’s book “Cooking for Friends”  100 recipes.. One year.  I will end the year with my traditional Christmas Eve party and serve the most successful dishes created in the following year. Cross your fingers for me… I’m terrified.  I am not a professional cook, but I have a true love of cooking and entertaining.  I do realize my skill is very limited and I know I’ll be doing a LOT of google searching!

I invite any of you out there who happen to trip upon my blog to join me in my journey.

Tomorrow I will write more and explain where my love of Gordon Ramsay comes from and how he has inspired me to always do the best I can do in everything I attempt.  Wish me luck.