It Was Just a Quick Fettuccine Alfredo, Really it Was!

In this post I’ll tell you how farfalle with bacon, peas and sage was a super quick mock carbonara. Even my pea haters loved it.

Okay so last night I was so exhausted from all the New Years festivities when I got home from work, I went to take a nap. I don’t know what was wrong with me I seriously thought I was going to die. My husband came in and woke me up and advised me that it would be a bad idea to take a very long nap and told me that he had run out and picked up some dinner. I asked him what he had picked up and it was Jack in the Box. Ugh! After the trip to and from Las Vegas I was pretty sick of fast food, and the burger he brought me was dried out and disgusting. I wasn’t very upset with him because honestly he was just trying to be a nice guy because I was so tired. I did however express my exhaustion of take out and told him that the next night I was going to cook if it killed me.

When he picked me up from work I had decided we’d just take a quick stop at the market and I’d get some cream and we’d make some alfredo, because I had done a delicious sauce at my brothers with the left over cream from my pork tenderloin from my first dinner. He agreed, seeing how alfredo is one of his favorite dishes. Of course you know I had GR’s book with me. What good stalker doesn’t carry her book around with her right? I’m just kidding, I’d never stalk anyone but I do carry the book in case I get a whim.

No, Farfalle with Bacon, Peas and Sage is BETTER!

Well guess what dear readers? I had a whim! I seemed to remember a dish called farfalle with bacon, peas and sage. I opened the book and discovered a dish that seemed to be as low key and easy as the alfredo would be. A few more ingredients but what the heck right? I actually had to go to two stores because the market i was at didn’t have fresh sage, or a wedge of Parmesan. So I went to another market and got my remaining ingredients along with a bottle of white wine and some shrimp for a compliment to the pasta dish. I had commented to my husband that I’d be cranky if I got home and the kitchen was a mess and he assured me that it wouldn’t be because he had done it in the morning. ARGHHHHHHHHHHHHHHHHHHHHHHHHHHHHHH.

Okay so after we quick cleaned up the few things that were out, here I was again chopping and slicing and being as professional as I could be by having all my ingredients prepped and ready to throw in at just the precise time. My first surprise was reading to cook the bacon in olive oil. WOT? Bacon? In olive oil? Isn’t it fatty enough? Well Gordon Ramsay hardly looks fat and after all he is the master right? *PLOP* As the bacon began to sizzle my house began to fill with the yummy smell of frying pork, if I had to imagine a kitchen in heaven this is what it would smell like. Anyway the dish was coming together quite nicely and to my amazement very easily too. My eldest child came in and was sniffing around and said “you know I can only have 1,200 calories a day and I think smelling this yummy goodness just took 5 of them!

Okay sauce simmering, i then took the shrimp that I had drizzed with olive oil and sprinkled with some fresh dill weed and placed the skewers strategically on the grill as to not over cook them by needing to over crowd them, we were almost ready to eat.

A Gourmet Meal is Just That Easy

Right, pasta done (Barilla pasta is my favorite)… toss in the yummy sauce as GR describes as an easy version of pasta carbonara and plate! Pour the wine, add a couple of shrimp skewers and VOILA! Gourmet meal! A KEEPER according to my son who was snarfing down the food faster than a gerbil on a running wheel. I kid you not dear readers including prep time this meal took 35 minutes from bag to to plate. Thank you GR from a very tired me!

Personal observation: You don’t need a lot of time to eat well. 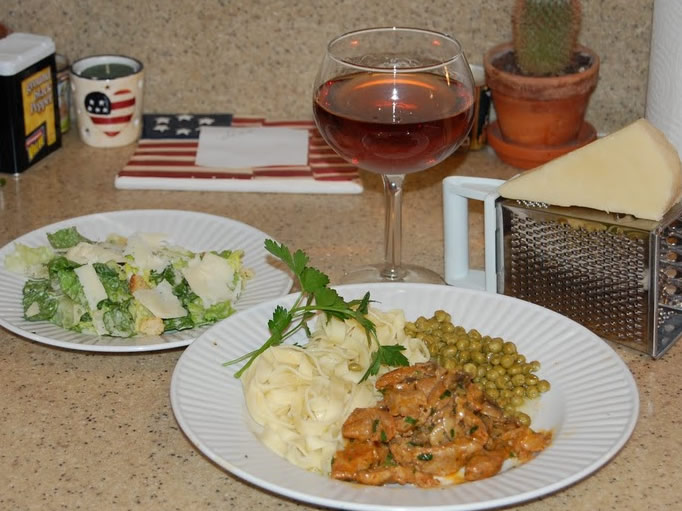